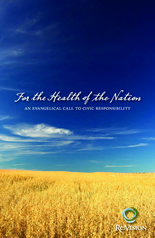 “The Scriptures make it clear that a biblical agenda is broad and urgent. God’s concern extends from the protection of marriage and the family to justice for the poor and the oppressed, from the sanctity of human life to care for creation, and the furtherance of peace and freedom.”

Thus begins an introduction to “For the Health of the Nation” on the web site of the National Association of Evangelicals. It is a document produced in 2004 with the subtitle, “An Evangelical Call to Civic Responsibility.”

I guess I had my head in the sand back then, but I don’t remember reading this until a friend sent me the link this week in advance of a meeting that is about to be held in Dallas regarding global childhood hunger.

“Political or policy prescriptions alone will not solve all of our problems, but we are called to action and the renewal of human structures as we wait for the fullness of God’s kingdom,” the site continues.

Well, in my neck of the woods, I don’t think many believers would say they have been called to “the renewal of human structures” while we wait for Christ’s return. Where does that come from? The authors of this document would say it and the “call to action”  come from Scripture, and they spell this out in the 12-page document.

“For the Health of the Nation” outlines seven issues that are important to evangelicals, including religious freedom, family life and children, sanctity of life, poor and vulnerable, human rights, peacemaking, and creation care.

Political partisans seldom put all of those issues together in the same platform. For instance sanctity of life (Republicans) and care for the poor and vulnerable (Democrats) make strange political bedfellows. Now, many Republicans would say they care for the poor and vulnerable, and many Democrats would say they believe in the sanctity of life, but their policy initiatives do not always bear that out.

I commend this NEA document to you. We might quibble here and there, but it’s a good evangelical statement on why civic involvement is important for Christians.